The Career Center is now virtual! Access all resources and services on TartanEdge, available 24/7.

5 People on How Their (Really Cool) Hobbies Make Them Better at Their Jobs was originally published on The Muse, a great place to research companies and careers. Click here to search for great jobs and companies near you.

There are plenty of things that allow me to effectively run my writing business, like my commitment to clients and my ability to put my nose to the grindstone and write (even when I don’t feel like it). Oh, and hiking.

Hitting the trails and writing might seem unrelated, but they’re not—hiking helps me clear my head and come up with new, interesting ideas that, without fail, make it into my work. It also calms and centers me, which allows me to juggle multiple projects without feeling too stressed out. And a solid hike always makes me more upbeat and energetic—which is key when I’m talking to clients or pitching new business.

My hobby, without a doubt, makes me better at my job. And that’s not uncommon. Taking the time to pursue hobbies can have all sorts of positive effects, including better stress management, increased creativity, and higher levels of job satisfaction.

“You approach hobbies or passions with authentic curiosity and interest,” says Marti Konstant, author of Activate Your Agile Career: How Responding to Change Will Inspire Your Life’s Work. “A hobby, especially one unrelated to your line of work, will shine a light on new ways of thinking or solving problems.”

Konstant, for example, considers running her form of meditation. “I’ve solved more work problems and come up with new ideas while on the running path,” she says. It’s also helped her relate to other executives and climb the ladder. “Running marathons and half-marathons helped build street cred for me with colleagues, partners, and bosses,” she explains. “These athletic activities were openers for discussion. It helped me as I moved from manager to director to VP.”

No matter what you enjoy doing, chances are, it can make you a stronger employee or business owner. Not convinced? Let’s take a look at how five other professionals used their very different hobbies to improve their work.

“Law school is a stressful time for students, with intense competition, little sleep, and the pressure of the time and money they’ve invested in pursuit of a degree,” says Wilson. “Since our office controls enrollment, grades, and exams, we often deal very directly with students’ frustrations.” 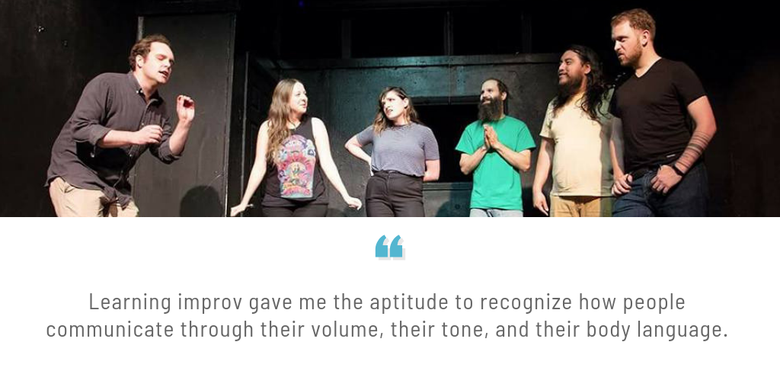 Using his improv skills, he can listen carefully and suss out what’s really going on with his students (and, more importantly, how to help them).

“Good performers listen to the words their fellow improvisers say, but listening extends far beyond the words we use. Learning improv gave me the aptitude to recognize how people communicate through their volume, their tone, and their body language,” says Wilson. “This lets me understand where students are coming from and what’s motivating their behavior.”

Once he’s figured out what’s beneath the surface, he can tailor his response—whether it’s to offer an empathetic ear or use humor to defuse the tension.

“Some folks need someone who remembers how awful exams are. Some need a friend to empathize with their larger frustrations about the school, however irrelevant it is to the task at hand. Some need a clown wearing stupid shoes that they can make fun of,” he explains. “Improv gives me the flexibility to slip into any of those roles whenever it’s called for.”

You wouldn’t necessarily think going to punk shows would make you a better social worker. But Paige DeMontigny, who’s been attending since middle school, says her long-time devotion to the punk rock scene has helped her step out of her comfort zone, have new experiences, and connect with people from different backgrounds—skills she says are essential in her role as a social worker. 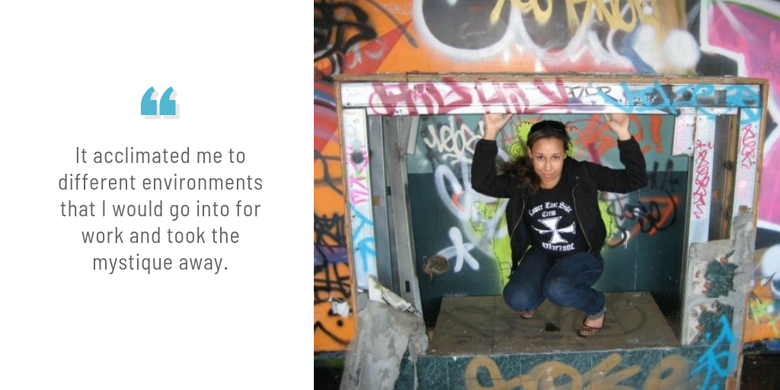 DeMontigny grew up in an upper middle class town. But getting into the punk scene meant visiting venues in urban and rural areas all around New England, “some as simple as a biker bar and some as secret as an apartment attached to a potato chip factory,” says DeMontigny.

“It acclimated me to different environments that I would go into for work and took the mystique away,” she adds. “It encouraged me to travel, sleep in cars, get dirty. It anesthetized me to meeting people that looked different from me and grew up different ways.”

Being a punk rock insider also helps DeMontigny form better connections with her clients. It “gives me a funny talking point during orientation icebreakers,” she says, and “it’s always something that gets a smile or second look from someone and creates a dialogue.”

As the founder of the startup GreenPal, Gene Caballero has a lot of decisions to make—and he credits the piano with helping him stay focused and able to make the right choices for his company, an online lawn care marketplace. 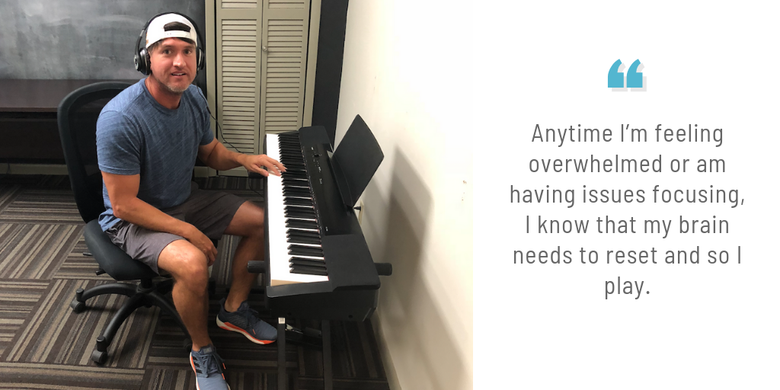 “My team and I were approached for venture funding and the decision [of whether] to take money was weighing heavily on me,” says Caballero. Instead of going back and forth between the different options in his mind, Caballero sat down and played the piano—and found the clarity he was looking for.

“Anytime I’m feeling overwhelmed or am having issues focusing, I know that my brain needs to reset and so I play,” says Caballero. “I probably played more piano in that week than I ever have.”

Ultimately, Caballero decided to forgo the investment, a call he felt was best for his business. Playing, he says, helped resolve any insecurities he had about the decision.

Christina Avellan loves stand-up comedy because it helps her think on her feet and make people laugh—both skills that come in handy at her job as a UX researcher for Walmart eCommerce. 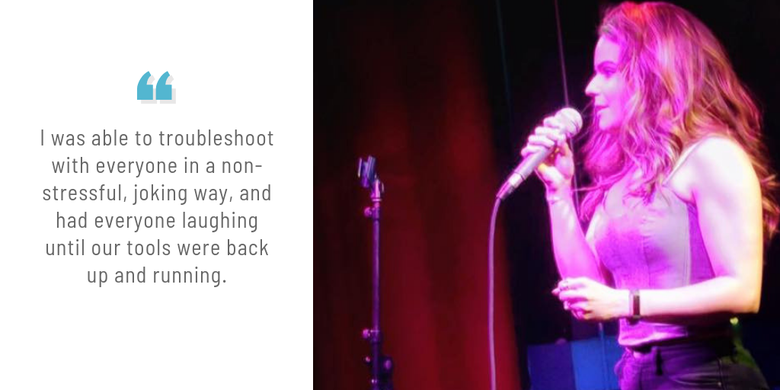 “I don’t get flustered,” says Avellan, who performs stand-up in the Portland, OR area. “For example, I was running a study this week for a high-visibility project,” she explains. During one interview, “both the participant and the stakeholders were having technical difficulties, and I was able to troubleshoot with everyone in a non-stressful, joking way, and had everyone laughing until our tools were back up and running.”

Working in the technology sector definitely has its highs and lows. Thanks to go-kart racing, Marcin Kloda—VP of Technology and General Manager, Americas at the global software outsourcing firm Intive—knows how to take them in stride.

“I’ve learned that races can be long and have their ups and downs. It doesn’t matter how you start, but how you finish the race,” says Kloda. “This type of big-picture mindset helps me better prepare for challenges at work and keeps me focused on the end goal.” 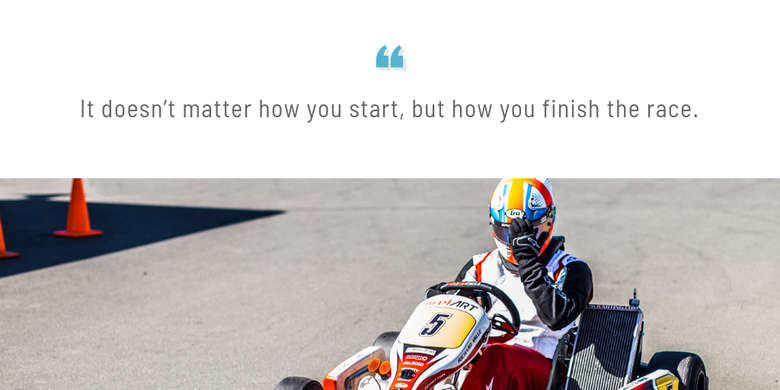 Racing has also helped Kloda stay humble as he’s grown in his career.

“In racing, I have lost some races and won some races. There has always been someone faster, someone better,” says Kloda. The humility he’s learned “is something that I carry with me to the workplace, and has helped me with my relationships with customers and employees.”

View staff and schedule an appointment

The Career Center is open virtually from 8:30 am until 4:30 pm during the Winter Break.