Fall 2021:  The Career Center is open for in-person business.  Appointments are offered in-person or virtually and can be scheduled on Handshake.

All resources are also available 24/7 online on TartanEdge.

The career center will be closed and staff will be unavailable Thursday and Friday November 25-26 for the Thanksgiving Holiday.

I Turned My Love for Climbing Into a Career in Adventure Photography was originally published on The Muse, a great place to research companies and careers. Click here to search for great jobs and companies near you.

When she was living in Wyoming five years ago working at City Kids Wilderness Project, Savannah Cummins learned how to rock climb. The following winter, while working as a ski lift operator at a nearby resort, she told her co-workers she wanted to pick up ice climbing, too. Eventually, one of them taught her, and she quickly fell in love with the sport.

“I got hooked and couldn’t stop!” she says.

But just a year later she did have to stop. While visiting family, she joined her dad for a high-intensity fitness class and partially dislocated her left shoulder. The doctor’s orders? Surgery and six months of rest. That meant no climbing, too.

So, she took it easy. But she didn’t stay away from the mountains. “I love the simplicity they offer,” she explains. “When I’m outside, I don’t have control over anything but me. I only have myself to rely on.” 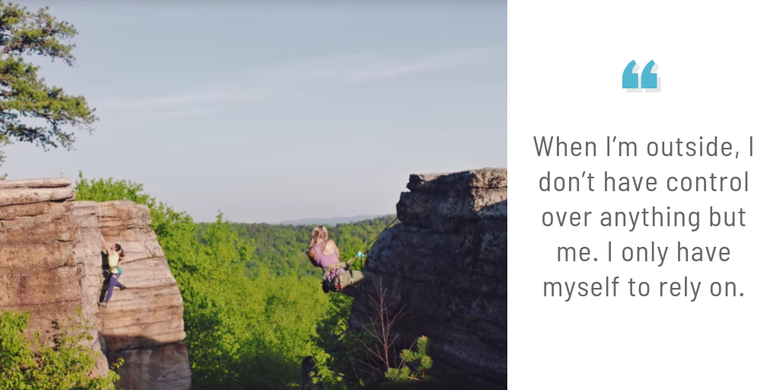 Cummins still joined her friends when they went climbing. Instead of scrambling up the rocks alongside them, though, she took photos using the DSLR camera she’d received as a birthday present a few years prior. Up until this point, she hadn’t known much about photography. But with all this new downtime stretching before her, Cummins decided to venture outside her comfort zone.

“I realized this was the perfect opportunity to learn something new,” she explains. So, she played around with the different settings, perfecting her technique along the way.

As soon as her prescribed rest period was over, Cummins started climbing again—only to get injured during a trip to the Red River Gorge, a canyon system in Kentucky. “On my last climb of the day, called Fuzzy Undercling, I grabbed a hold in a funny position and heard tearing sounds in my right shoulder,” she shares. An MRI confirmed another tear. To avoid surgery, she chose a year of physical therapy.

Cummins wasn’t thrilled—who would be? But this time, she knew what to do while she healed. She upgraded her camera and started shooting her friends’ adventures once again. Two weeks later, she sold her first photo for $30.

“At the time, I didn’t realize photography could be a career or even something I’d be good at,” Cummins shares. “But selling that first photo gave me inspiration to keep chasing it.” 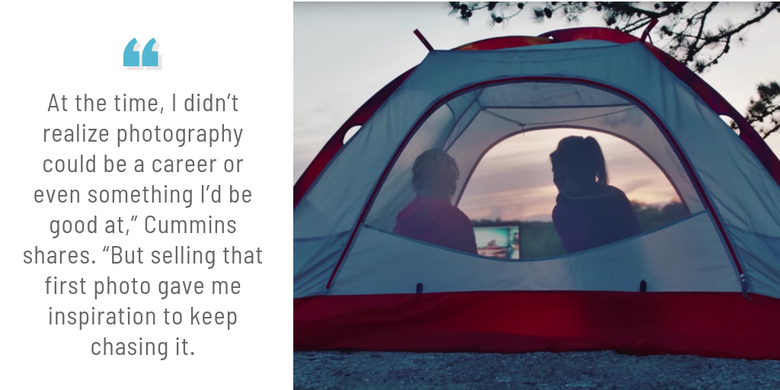 In the six or so months before selling that photo, Cummins hadn’t been working. She’d saved up enough money from her jobs at a climbing gym and as a Jackson Hole mountain guide to take half a year to focus on climbing. When she realized she was actually pretty talented at photography, she decided to pursue it head on.

So, she started talking to professional photographers to learn more about how to turn it into a business. She absorbed as much as she could about the craft and the industry and dedicated as much time as possible to practicing. When she was first starting out, she babysat on the side to supplement her new passion.“Babysitting allowed for a flexible schedule,” she explains, “which meant I could get outside to continue taking photos and push myself as a climber and photographer.”

These days, Cummins is an independent professional adventure photographer. She’s paid by clients such as Google, REI, Patagonia, The North Face, and Climbing magazine to photograph professional outdoor and adventure athletes in their elements—in India, Greenland, Antarctica, and all over the world. She’s also recently been the face of Google’s Pixelbook campaign.

One of her favorite assignments was documenting her friend, Katie Bono, on a speed climb of Denali, the tallest mountain in North America. The average ascent time is 21 days. Bono did it in 21 hours.

Make no mistake—now that she’s fully healed (again), Cummins still climbs. And though she doesn’t consider herself a professional athlete, she’s pretty darn good. After all, she has to be able to keep up with her subjects.

However, she’s not quite as fast as Bono is. So, for the Denali shoot, she took photos of Bono during acclimatization—getting used to the altitude—traveling, and resting at the camp sites. And, of course, she captured some breathtaking scenery as well. 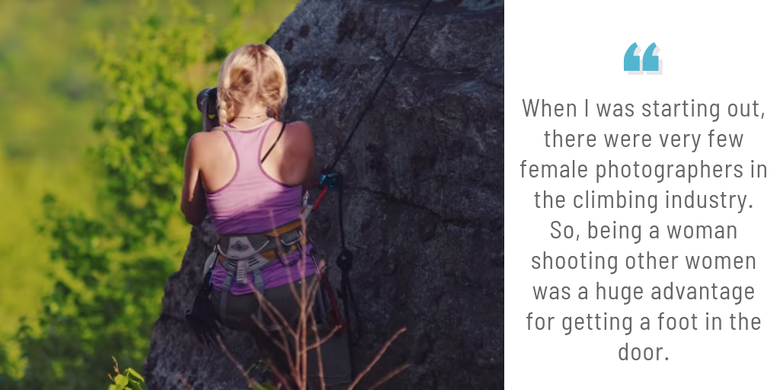 Cummins believes that her success as a photographer is partly due to the fact that she’s a woman. “When I was starting out,” she explains, “there were very few female photographers in the climbing industry. So, being a woman shooting other women was a huge advantage for getting a foot in the door.”

The lesson to take from her story isn’t that you need to get injured in order to stumble across your dream career path. It’s that you need to learn how to turn a setback into a comeback, which is exactly what Cummins did.

“At this point in my life,” Cummins shares, “I can’t imagine doing anything else.”

For those of you who want to follow in her footsteps and turn photography into a career, Cummins warns that it’s a hard path to follow. But, that doesn’t mean you shouldn’t do it.

“When you’re feeling like maybe you made the wrong choice or you’re feeling discouraged,” she says, “remember that we all feel that way, even the most successful photographers, and keep going.”

View staff and schedule an appointment